Skip to content
Share This
By: Chief Alik Ekebe.
Ntol a lelaa of Nselle.
Nigeria is bogged down by despair and hopelessness. Events on the socio-political scene hardly make one excited or hopeful for a better future.
For 24 years, Nselle in particular, has been totally neglected in terms of democratic dividends by selfish politicians who have continued to connive with their paymasters from outside to exploit you.
In 2000 the Obasanjo administration selected Njemetop village to be among the 500 villages to benefit from that regime’s Rural Electrification Program but it was scuttled by selfish politicians who claimed to love you.
Look at the Edor-Nta/Nselle Road which has suffered series of rehabilitation issues from year 2000 to date, 2023. In year 2000 the Donald Duke administration attempted to rehabilitate this road with what they called “Con-Technology” but it failed.
In 2012 the Imoke administration started its construction but abandoned it after tarring only 3km from Edor. Who suffers it during dry and rainy seasons? Nta/Nselle people, of course.
Nselle, have we not suffered enough to make us to reason? For 24 years, you have been planting yam on the same plot without yielding any harvest.
Have you ever heard something called Shifting cultivation? Try it and see if you will not produce a bumper harvest. You have been stagnant in a pool of dirty water for 24 years. Shine your eyes, my people.
The People who are cheating and misleading you, are not better than you. It’s the opportunity that they have over you, is what they are using against you.
Since 1999 you have been held hostage by the same shameless structures for 24 years without anything to show for it.
Is it not enough for you to free yourselves from political bondage? Democracy is a game of free choices. Vote your conscience. Make another choice. There are 15 presidential candidates to choose from.
Avoid those that have held you hostage for 24 years without development. Avoid them because they have nothing to give you other than Maggi, salt, and a cup of rice.
Nigeria is the poverty capital of the world today, courtesy of these expired politicians; Nigeria is in debt of #77trillion Naira, courtesy of these same expired politicians.
Poor Nigerian workers retired after 35 years service but will not be paid their pensions. But when politicians serve for 8 years they draw huge pensions and allowances. Which country is governed like this in the world? Only Nigeria.
Don’t allow yourselves to be misled by these selfish politicians again. Be wise and vote wisely.
Enough is Enough.
Chief Alik Ekebe.
Ntol a lelaa of Nselle.

Tue Jan 24 , 2023
Share This By: © STANDARD MEDIA. It was celebration galore as the people of Mbarakom Ward came out in large numbers to welcome the APC Candidates into their community. The Honorable Commissioner for Petroleum Resources, Rt Hon Itaya Asuquo Nyong assured the APC Candidates of total support in Mbarakom. The […] 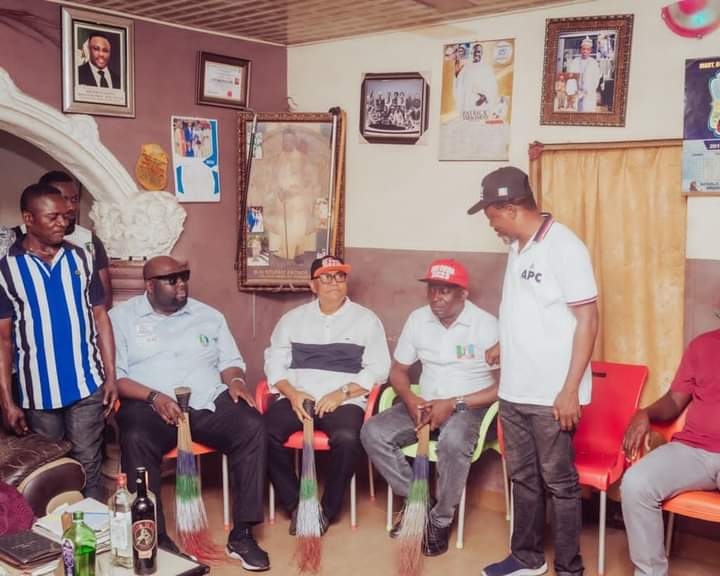