The brief ceremony which took place at his Campaign Secretariat on Friday was witnessed by the 7 LGAs Chairman, Chapter Chairmen of the APC from Southern Senatorial District, Chapter Secretaries, Ward Chairmen, Ward Secretary, Youth Leader and Women Leaders from 76 Wards. 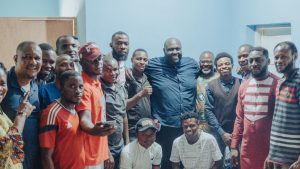 Some of the beneficiaries praised the Senatorial Candidate for his magnanimity, adding that Asuquo Ekpenyong had never hidden his love for his people, particularly the less-privileged among them.

Speaking on the occasion, APC Chapter Chairman of Bakassi, Mr Gerald Esin thanked Asuquo for supporting the people to celebrate the festive period. According to him the gesture at this period of time is very timely, he stated that it is significant to note that Asuquo is yet to assume office and is already shouldering such responsibilities. He said the rice will be distributed accordingly.

Before distributing the item, Asuquo Ekpenyong disclosed that the gesture was borne out of his desire to provide relief for people of the district during the yuletide season.

He said that the Bible preaches generosity, hence his continued determination to provide succour to the people .

“I decided to distribute these items to the people of my constituency in the spirit of Christmas and New Year celebrations.

“I want them to celebrate Christmas and New Year with smiles on their faces and with joy,” he said.

He urged the people of his constituency to emulate the virtues of Jesus Christ by living in unity, peace and be their brother’s keepers at all time.

A cross section of the beneficiaries commended Asuquo Ekpenyong for the gesture, saying that it would go a long way to ameliorate the current realities.

TINUBU IS NO FRIEND OF WORKERS OR THEIR TRADE UNIONS.

Sun Dec 25 , 2022
Share ThisBy: Biodun Olamosu.     The recent meeting of the presidents of the NLC and TUC with Bola Tinubu reinforces the mistaken impression that Tinubu is a friend of workers and their trade unions.   Tinubu has throughout his life consistently attacked workers and their organisations. In addition, the […]