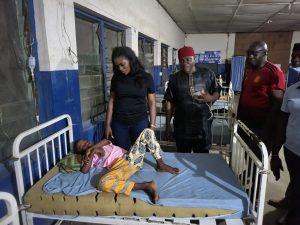 The incident which occured with an index case on Thursday, December 15th 2022 was said to have been escalated after the consumption of a contaminated water from the village drinking source.

Addressing news men after a visit to the Community and the health facilities where those affected are recuperating, the Director General of the Cross River State Primary Healthcare Development Agency, Dr Janet Ekpenyong regretted the unfortunate incident which she said would have been averted if simple protocols were taken into consideration.

According to her, prior to her visit, the state Government had deployed a response team together with representatives from the world health organization, the Nigerian Red Cross and Wash Program who had intervened accordingly, and rescued many lives. 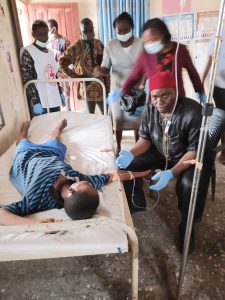 The DG who was with the Permanent Secretary of the Ministry of Health, Dr Iwara Iwara, representatives from the state epidemiologist, World Health Organization, Red Cross and others said

“The State Government find this incident quite unfortunate and sympathize with families who have been affected.

Because of how fast the transmission rate of cholera is, we have recorded deaths with many other victims hospitalized in various government owned facilities and graciously, responding to treatments.

We are applying every possible means to halt transmission as we have gone across the community sensitizing the people on the possible ways of managing the disease as well as speaking to the community leaders to support the state Government by lending their voices to ensure their communities adhere to hygiene protocols to end cholera and other related illnesses”.

She also added that samples had been taken and sent for confirmation, while treatments of the water source and fumigation in on course.

The team also distributed drugs, consumables and other commodities needed for their response.

Cholera can be caused by contaminated water or food source and as such everyone is advised to maintain good personal hygiene, boil water and food before consumption, regularly wash hands to kill germs , and always report cases of suspected incidences early to the health experts.