The petitioner, Obono Obla, amongst other demands, asked the EFCC to investigate the expenditure of the sum of N15 Billion by Governor Liyel Imoke approved by the Federal Government of Nigeria to ameliorate the economic losses suffered by Cross River State as a result of the judgment of the Supreme Court that led to the loss of 76 Oil Wells to Akwa Ibom State by Cross River State and the transfer of the sovereignty of Bakassi Peninsula to the Republic of Cameroon.

And to also investigate the expenditure of a monthly augmentation of N500m (Five Hundred Million Naira) from the Stabilization Fund paid to the Cross River State Government in 2013 by the Federal Government of Nigeria for two years at the first instance.

Obla’s request was sequel to information disclosed in a leaked letter dated April 12, 2014 which the RMAFC sent to Imoke, requesting to visit the State to monitor and evaluate what the Bakassi intervention fund had achieved. The letter also disclosed that a lump sum of fifteen billion naira was released from the Stabilization Fund by RMAFC, to the Cross River State government, plus five hundred million naira monthly augmentation for two years, amounting to 6 billion naira, which was also paid in bulk in June 2013. In addition to another N400million Naira every month. (The letter is attached here.)

Then in May 2017, a former Chairman of the Revenue Mobilisation Allocation and Fiscal Commission (RMAFC), Aliyu Mohammed, during a visit to the State to see Governor Ayade, said as part of efforts to assuage the pains caused by the loss of Bakassi, about N38billion has been paid as special allocation to the State by the Federal Government over a period of 11 years, as compensation.

CrossRiverWatch has been tracking this development since 2012. So when the incumbent Chairman of RMAFC, Mr. A.M. Shehu, mentioned $500million, it conflicted with all I have heard previously about this matter and created doubts in my mind. While it is clear that A.M. Shehu, told a lie about the currency they send to Cross River State and replaced Naira with Dollars, it is even more worrisome that Calabar is silent on the whereabouts of the money. Calabar is more anxious to tell us it wasn’t Dollars but reluctant to tell us what the Naira they accept they have been collecting has been utilized on.

After joining their political party, Obono Obla, abandoned the petitions he wrote against Governor Imoke and the press statement from Governor Ayade’s office on Friday, though conceded that they get N500m every month, still didn’t not tell the public what exactly the money has been used for. That exactly should be our bone of contention. It is our right to know and we need to know and we actually need to know NOW!

Meanwhile, I was abruptly corrected yesterday during an interview with a relevant source. A top source in RMAFC, who pleaded anonymity, told yours sincerely that, contrary to what people are saying, the Bakassi augmentation fund is meant for the entire Cross River State and not one LGA alone.

The source said: “Before Cross River lost the Bakassi oil wells to Akwa Ibom, money for the 76 oil wells was not sent to Bakassi LGA alone. It was part of the Cross River State share from FAAC for the development of all the LGAs. Bakassi LGA has its own share from the center like the other 17 LGAs. The augmentation is to serve the same purpose that the oil revenue was serving and I am sure the revenue was not used in Bakassi alone. It is for the whole of Cross River State to augment her allocation for the lose of revenue following the ceding of Bakassi to Cameroon. I need you to correct that impression out there please.”

Sun Nov 6 , 2022
Share ThisBy: AGBA Jalingo. Since the Ogoja Magistrate Court 2, was renovated with your generous donations after it was abandoned by government for 25years, the Court has graciously decided and disposed a total of 109 cases, struck out 74 cases for want of diligent prosecution, convicted two criminals and has […] 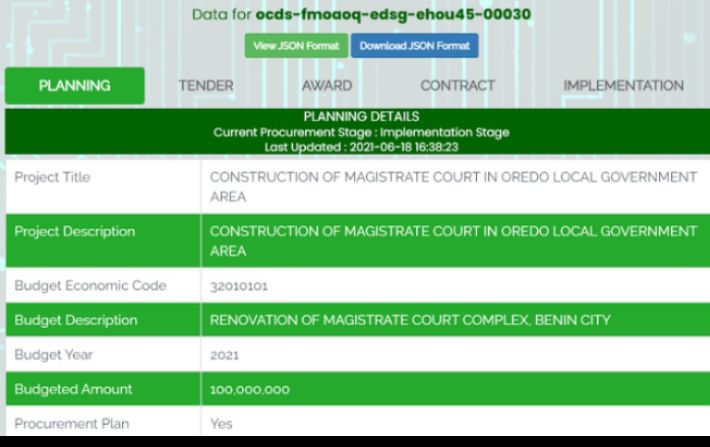