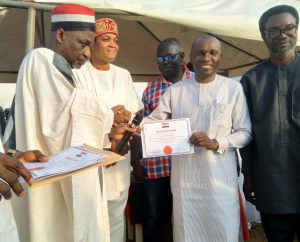 In confirmation of his candidacy,the immediate past Minister of Niger Delta Affairs,Pastor Usani Uguru Usani on Wednesday received his Certificate of Return as the flag bearer of Peoples Redemption Party (PRP) Cross River State.

In the presentation,the National Chairman of the party Alhaji Falalu Bello said the party is overwhelmed with joy  having captured a former Minister under the ruling All Progressives Congress (APC). 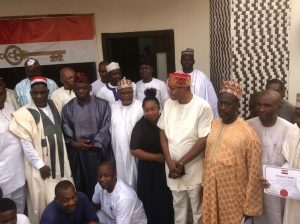 Stressing the ideology of the party which hinges on true federalism, equitable distribution of resources, justice for all,provision of infrastructure among others, Alhaji Bello also boasted that the party has the youngest and brightest candidates ever produced in Nigeria political history.

He therefore challenged other presidential candidates to go for a three kilometre race with Kolawole Abiola positing that physical fitness is one of the criteria for for such an exalted office.

While rejoicing over the progress and acceptability of the party, Alhaji Bello said PRP that was seen as a sectional party is now a national party and is poise to win the 2023 general election.

In a remark,the presidential candidate of the party, Latifu Kolawole Abiola said assure Nigerians to expect a repeat of 1993 election noting that the party have a very strong grassroot support base and crop of candidates.

Speaking on behalf of the southern Nigerian gubernatorial candidates,Pastor Usani Usani stressed the need for party members to purge mediocre ideas and work strategically toward the success of the party. 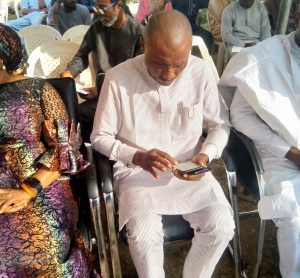 Questioning the strength of the ‘so called’ major parties,Usani said that there’s no big or small party pointing out that any party can win election if they have a better strategy.

Juxtaposing between the other parties, Usani affirmed that PRP have better chances of winning elections in Nigeria in view of its acceptability across the country.

Sun Jun 19 , 2022
Share This    By: Admin.   Dear People of God. PASTORAL INJUNCTION ON ATTENDANCE TO CATHOLIC ADORATION MINISTRY CHAPLAINCY ENUGU   In the light of the happenings in the Catholic Adoration Ministry Chaplaincy Enugu: capable of undermining the Catholic faith and teachings; and after several fraternal corrections and admonitions to […]