Reflections from the Hinterlands of Obubra. 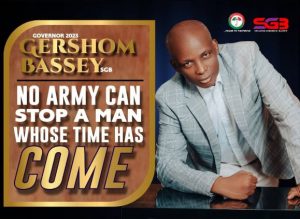 I can still remember with nostalgia, when as a little boy in my village, I sat under the almond tree listening to tales by moonlight from my old grandma. Indeed, the excitement and anticipation of the night with Grandma was palpable as we hurriedly did our evening chores, ate our meals and rushed to take the front row around grandma’s stone stool. As usual her stories were ever captivating and they thrilled us enormously.

One particular story struck a chord in my heart and stuck. It was a story that ended with the saying, “children only throw stones and sticks at ripe fruits”. For want of time and space, I can not go into the whole hog but suffice to say that the moral of that story is that only successful people get barrages of insults and abuses. Indeed, the torrents increase as your profile rises.

A mango tree with ripe mangoes for instance, will take stone attacks to be harvested of its fruits so that it can bear again the next season. So the attacks are necessary to rid the tree of ripe fruits to make way for more productive life.

The analogy above captures aptly the travails that Distinguished Senator Gershom Bassey is experiencing right now in the hands of detractors and opponents. The only sin the good Senator has commited is to be a successful Legislator aspiring to lead the good people of Cross River State as Governor in 2023. The vitriol directed at such a high-profile personage by some emasculated runty voices on social media does not bode well for our emerging democracy. Nevertheless, this only goes to show that Sen. Gershom Bassey is the man to beat and the frontline gubernatorial aspirant, the one who’s calling is to liberate Cross River State.

His declaration to run for Governorship sent jitters down the spine of the spineless and in their weaknesses and fear, the only course of action left to them is to lash out in an uncivilised manner at an innocent man. They have stooped so low to exhibit very unethical behaviour in their verbal attacks on Sen. Gershom Bassey. It is worrisome that even juveniles among the ranks of the opposition who as yet have not learnt how to change their diappas, are the ones who crawl the social media space spewing vituperative expletives at a man of honour like Distinguished Senator Gershom Bassey. These peewees who’s familial lives leaves much to be desired have totally lost or didn’t even imbibe the worthy African values of respect for elders. I cry for this generation who do not realise that the bedrock of journalism is ethics. It is disheartening to see this crisis of incivility in politics.

In all these, Sen. Gershom Bassey has remained calm, collected and focused on the project at hand; that of leading our dear state to Uhuru. His calm mein and composure is never frazzled because of the incessant imbecilic attacks on his person. He has maintained a high sense of civility and decorum in the face of this cyberbullying and verbal abuse on social media pages. He has shown than no sacrifice is too much to take for the emancipation of Cross River State and has not allowed himself to be distracted from the noble cause he has chosen. He has a high self-concept and thus places himself above cheap petty innuendos.

Sen. Gershom Bassey has continued to exude confidence and capacity in how he goes about his campaigns and this is rattling the other side who have such high inferiority complex which they hide behind false bravado and bullying tendencies. It only goes to show that Sen. Gershom Bassey is the better human and his civility irks the uncivilised so much they resort to base swinishness.

This dramatic decline in civility in our politics needs to be checked before it gets out of hand. The other side should develop the spirit of sportsmanship and relax to enjoy the game of politics. Running from pillar to post with writeups like Picidae droppings only exposes their complex problems and anxieties. Like GEJ said once, inordinate ambition is not worth the blood of Cross Riverians. Recognizing and bowing to superior intelligence and prowess is not a sign of weakness. So the other side should accept the inalienable fact that Sen. Gershom Bassey is the next Governor of Cross River State. QED!

Mon May 16 , 2022
Share ThisBy David Agabi The people of Sabo Chiefdom in Nasarawa State on Sunday made a passionate appeal to the State Governor, Engr. Abdullahi Sule and his government to help facilitate the establishment of Development Area in their chiefdom. The appeal came on the heels of perceived and clear neglect […]