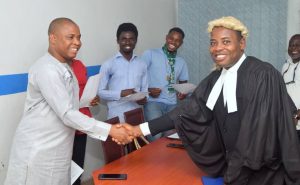 The 6th Executive Council of the Association of Cross River Online Journalists (ACROJ), was yesterday inaugurated in Calabar, having taken their oath of offices as administered by John Omligbe Esq.

The ceremony which was held at the Association’s Secretariat, yesterday in Calabar, was described as historical by the Chairman, Comrade Offiong Edem Darlington. 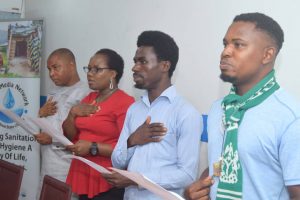 Others who were sworn in alongside the Chairman who is doing his second term include Comrade Gloria Umo Akwang, as Secretary-General, Comrade Jonathan Ugbal as Deputy Secretary-General and Comrade Patrick Obia as Financial Secretary.

In his acceptance speech, Comrade Offiong Edem Darlington said ACROJ is entering a new dispensation with a renewed vigor to pursue excellence in journalism.

He said, ACROJ. has faced tough times and harassment in the last couple of years by the present Administration but has persevered, notwithstanding.

“ACROJ has taken a lead towards how to do things. We are moving forward. This is for the younger people who are coming in, looking for experience and seeking a career in journalism. We are here to create that enabling environment and allow them thrive,” he said.

Tue Apr 26 , 2022
Share This  By: ENEJI, Simon Ushie.   Another day to commemorate the World Malaria Day is here as Malaria amounts for millions of deaths in Nigeria as well as maternal and child mortality rate globally, hence the adoption of drastic measures to curtail these effects cannot be over emphasized.   […]