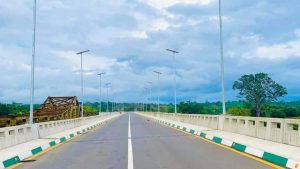 The Chairman, Mobilisation of the Cross River State APC Lobby Group, Mr. Asuquo Ekpenyong Jnr, has commended President Mohammadu Buhari for his investment in infrastructural development of the new Ikom Bridge, the Calabar/Itu Road and the 2nd Niger Bridge, as well as others still undergoing construction across the country. 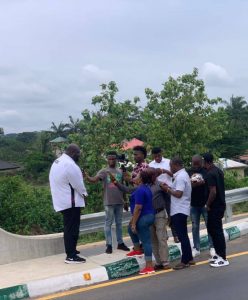 Ekpenyong, who made the commendation in an interview with journalists shortly after the Cross River State APC Youth Lobby Group Voters Sensitisation tour of Ikom and Etung Local Government Area Councils described Buhari’s completion of the New Ikom bridge and many others as a huge success.

“The New Ikom Bridge is the most important infrastructural Investment that the All Progressives Congress (APC) led Federal Government has embarked upon in Cross River, hence, has open up commerce and industrialisation.

“You can see that the old bridge is many decades so old and as a result very weak and can’t accommodate heavy duty trucks from across the senatorial districts and as such, cutting off economics activities in the State and the only option has been the diversion through the South Eastern States to connect the Northern States.

“This development with the commissioning of the new bridge has cut down supply time, logistics, and drive time. It is a wonderful initiative and remarkable project.

“What is more important is the level of investment in infrastructures by the Buhari led All Progressives Congress Government in Cross River State.

According to Mr. Asuquo, “even when people say, development follows votes, and if, we were to go through that theory or that principle, we should not have this level of investment in Cross River State.

“The Federal Government has invested in the new Ikom Bridge and several hundred billion in dualizing the Odukpani/Itu Road. It is live wire of commercial hub between Cross River and Akwa Ibom; in fact, the entire South-South. The road has been left abandoned by successive government even while we were in the same party over 16years with jumbo votes.

“However, even when Cross River State was not an APC state, the Federal Government thought it necessary when considering decision not based on sentiments but what is best for Cross Riverians and Nigerians to allocate values.

“The Federal Government has spent well over 120billion naira on this investment of Calabar/Itu Road and the Ikom New Bridge, and it is a testament to the leadership of President Mohammadu Buhari, and show the competence of the Minister of Works and his entire team. I want to use the opportunity to appreciate this wonderful, government.”

Asuquo Ekpenyong Jnr. message to Cross Riverians is simply to identify with the All Progressive Congress (APC), hence, according to him;

“considering the level of investment in the State, the government considered what was best for the people. It is important that when people look out for you, it is better that you reciprocate such good gestures.

“This is a Party that we really couldn’t give a chance when they came in, they have done for us what we have been begging previous Federal Administration to do for us.

They did for us even while we were not part of them. We must support the APC because they will do more now that we really have socketed to the centre.

“On this note, we really most appreciate our dear visionary Governor, Prof. Ben Ayade, for his foresight to liberate Cross River State, by joining the All Progressives Congress (APC) as we expect to benefit more,” he said.

As he called on Cross Riverians to take advantage of the ongoing INEC Continues Voters Registration to get their PVC’s and register as members of the All Progressives Congress (APC) in the State.

Fri Apr 22 , 2022
Share ThisBy: Admin.   The Association of Cross River Online Journalists (ACROJ) have elected new executive members to stair her affairs for a two-years tenure.   In the keenly contested election which had several members contesting various positions had publisher of The Parchment, Edem Darlington emerge Chairman to serve for […]