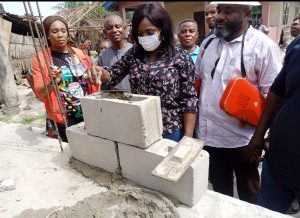 Seventy years after its founding as a community, Abasi, in the Bakassi local government area of Cross River state,  is to enjoy quality health care at the behest of the council chairman, Chief Iyadim Amboni.

Speaking during the foundation laying ceremony of the first-ever primary healthcare centre in the community, Iyadim said the gesture was in line with the council’s concerted effort to ensure universal health coverage.

Iyadim hinted that when fully operational; “this health facility will help eliminate the out of pocket expenditure that makes access to quality and affordable healthcare services inequitable mostly among the vulnerable pregnant women and children under five years”

The council boss added that the health centre which will be equipped with modern medical facilities will also help reduce infant and maternal mortality rate prevalence in the rural area.

While assuring that the project will be completed in a record time, he maintained that the health centre was in tandem with the vision of the health care development programme of the state government which aims at taking healthcare to rural dwellers.

Iyadim disclosed that the health centre will be commissioned by the state governor, Prof  Ben Ayade when completed.

In her remarks, Director General of the State Primary Health Care Development Agency, Dr  Janet Ekpenyong who performed the foundation laying commended Iyadim for embarking on such a life-saving project, promising to collaborate with the local government to ensure affordable and accessible healthcare service is accessible in the area.

Dr Ekpenyong lauded him not only for initiating the project but also for his zeal in ensuring its completion on schedule.

The Director-General urged them to see the health

centre as their project and therefore, guide it jealously as the state government will upon completion deploy health workers there.

On the need to stay safe following the recent outbreak of cholera in the area, the DG advised them to religiously observe good hygiene procedures by always boiling their water before drinking to prevent all forms of water-borne diseases.