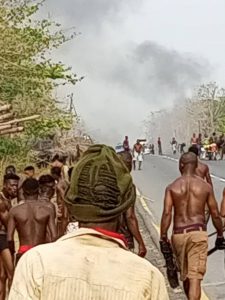 The Deputy Governor of Cross River State, Professor Ivara Esu, has warned that the State government will not hesitate to apply the full weight of the law on any individual, no matter how highly placed who is found culpable of formenting trouble in any community in the State.
Professor Esu gave this warning on Wednesday while on an on-the-spot assessment of the destruction wrecked due to the recent communal Conflicts between the people of Alesi Community of Ikom and Odonget Community of Obubra Local government Area.
The Deputy Governor who expressed serious displeasure on the level of destruction of property, infrastructure, Primary School, Ogar Agbor in Odonget, Palm Oil factories in the areas as well as economic trees among others.
He lamented and worried about the persistence resort to war and physical confrontation instead of dialogue as a means to peaceful resolution of differences among and between people.
Professor Esu further made it clear that the present administration in the state will not extend the latitude of its patience and look the other way when few disgruntled elements derives pleasure on the destruction of lives and property on the slightest provocation, stressing that life is sacred and no one has the right to take it while hiding under unjustifiable excuses.
The Cross River State Deputy Governor assured that government is going to dig deep into the root cause of the crisis between the two neighbouring communities to ascertain what must have warranted such display of callousness.
Professor Esu disclosed that the Cross River State government is going to ensure that a permanent boundary demarcation is put in place between the two communities, while at the same time extended invitation to community leaders of the two communities to come to his office in Calabar for a meeting with the view to resolving the contending issues.
He also directed the Chiefs and Clan Heads of the two communities of Alesi, Ikom and Odonget, Obubra to forward a list of all those behind creating crisis like the current one and hand over to the security agencies for proper investigation and action.
Also addressing the people, the Permanent Secretary, Special Services Office, Governor’s Office, Calabar, Dr. Alfred Mboto, informed the people that the visit from the State number two citizen to the affected Communities was to ascertain the level of damage done to both sides as the result of the conflict.
Dr. Mboto maintained that no meaningful development can take place in an atmosphere of war, destruction, suspicion and rancours, and called on the youths to sheath their swords, stressing that the best way to arriving at a peaceful settlement of any crisis is dialogue.
In his remarks, the Cross River Commissioner of Police, CP Aminu Alhassan, warned that the law will deal with anyone or group of persons found to destroy lives, property, houses and Economic trees under the guise of communal disputes.
CP Alhassan however admonished the two communities to learn to live together in peace while government seeks for permanent solution to their problems.
The Executive Chairman of Obubra Local Government Council, Hon. Dr Bassey and his Ikom LGA counterpart, Hon. Kingsley Egumi other government officials who accompanied the Deputy Governor on the visit were conducted round the destroyed site in the affected communities. 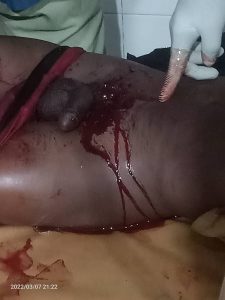 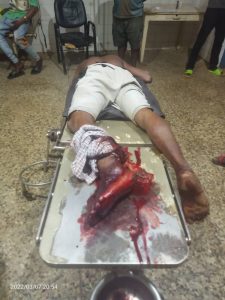 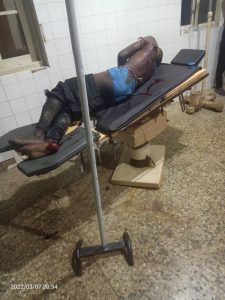 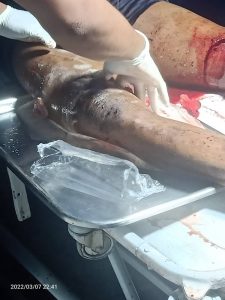 CRS 2023: BACK TO SOUTH AKIN TO FEDERAL CHARACTER PRINCIPLE FOR EQUITY, PEACE AND HARMONY-APC SOUTHERN STAKEHOLDERS.

Sat Mar 12 , 2022
Share ThisBy: Admin. The All Progressives Congress (APC) Southern Senatorial District Stakeholders under the Chairmanship of Chief Asuquo Ekpenyong, OON met at the Diamond Hall of Transcorp Hotels, Calabar, to address a World Press Conference on why the Back to South (B2S) Agenda, shouldn’t be negotiated but a clarion call […] 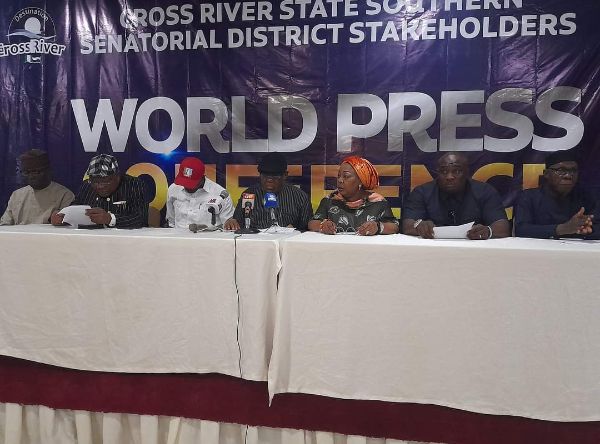