Yesterday, 22nd February 2022, we watched with amusement the lamentation treatise sent out by the loquacious factional Chairman of the All Progressives Congress in Cross River State, Alphonsus Eba, in which the cheap braggart inexplicably accused Governor Nyesom Wike of several baseless, tenuous, unsubstantiated imaginations of his not-so-fertile brain of conspiracies to destabilize Cross River State. The utter disrespect which underlines the press briefing granted by the factional Chairman of APC, Alphonsus Eba, establishes, beyond doubt, the pre-election trauma being faced by the failure-ridden APC ahead of the by-election on Saturday, 26th February, 2022.

Aware that Governor Nyesom Wike’s visit to Cross River State on Saturday 19th February for the PDP by-election flag-off rally ruffled not a few feathers in APC, we understand the pain and agony in the camp of the APC, which has resulted to an expression of schizophrenia and defeatism.

We challenge the APC chairman to organize a similar event and attract such a personality like Governor Nyesom Wike in his party to attend. We challenge them to invite their party leaders in South-South to Cross River State.

It is incongruous that Alphonsus Eba in his howler and humdrum ridden press briefing had the temerity to accuse Governor Nyesom Wike of trying to import Political “cannibalism” into Cross River State. Pray someone should please interpret what exactly this means in English language. I thought cannibalism refers to species that feed on their type, in simple language.

For a green-horn in Party administration that was imposed on the party by Governor Ayade without any experience whatsoever in political party administration, who is only pretending to be running the party because most of the prominent stakeholders have been sufficiently intimidated into submission to Governor/Emperor Ayade, how would such an uncouth fellow be elevated to such a position? That APC Leaders in the state have been reduced to grovelling sycophants is why a greenhorn monster like Alphonsus Eba so enthused in empty, boisterous talk and bitterness over his loss of the Party chairmanship position in PDP can prat around for lack of knowledge as to what to do to win an election and resort to unproductive press conferences.

Alphonsus Eba should be reminded that at his so called reception in his ward there was bloodletting that remains unexplainable until date because of his alleged predilection to occultism and consequential bloodletting, which he could not even spare his kinsmen in his desperation for power and money.

That a man who sleeps with, eats and breathes violence and cannibalism, can have the temerity to accuse his superiors of “cannibalism” is a display of his bad upbringing and unfitness for a public office that entails leading and persuading responsible citizens into believing in his party platform. We find such pedestrian remarks about Governor Nyesom Wike, highly condemnable and unnecessarily inciting and we hereby condemn such.

We further condemn in strong terms the attempt by APC to stoke the embers of anarchy and violence in the State at every point during the campaigns towards the by election of February, 26, 2022. We call on all security agencies to note the consistent attempt by the APC in Cross River State to incite violence in the belief that they can use the machinery of Government and official security outfits to intimidate the PDP because they are conscious of the fact that they cannot win the by-election in a free and fair contest.

It is further instructive to say that those who the gods have destined to destroy, they first make mad. For Okadigbo, whose life is characterized by thuggery and criminality to address Governor Nyesom Wike as a “motor park tout” shows the depth of his mental and intellectual ineptitude. We are bemused that a party like APC, with Governor Ben Ayade that superintended over the killing of Cross Riverians at Ogoja and Yala local Government Area during the Northern Cross River Senatorial by-election primaries could have the moral rectitude to talk about Political “cannibalism”. It is on record that a young Cross Riverian was shot and killed inside the house of a serving APC Commissioner in Yala Local Government Area, while Alphonsus Eba ordered the sporadic shooting of his own kinsmen at Echomofona. What else can be more cannibalistic than shooting your own kinsmen for Political relevance?

As we approach the by-election day, we call on Cross Riverians, especially the good people of Ogoja/Yala to remember the many sins of APC in Cross River State and resist the occultic party by voting overwhelmingly for the people-oriented PDP.

As a party, we refuse to be intimidated by the unwholesome shenanigans of the occultic cabals in APC, whose god is their belly.

On the laughable attempt to label Governor Nyesom Wike— a sitting Governor with immunity— a Security threat in Cross River State, we call on the APC to stop embarrassing rational and reasonable Cross Riverians by their show of gross ignorance and pettiness. Who is Alphonsus Eba to declare a sitting Governor a security threat? Must Alphonsus Eba dance naked in the market square always just to ingratiate Governor Ben Ayade before he can qualify for crumbs off Governor Ben Ayade’s table?

As a party, we sympathize and condole with the APC on the imminent loss awaiting them on Saturday, 26th February, our prayers and thoughts are with them in this trying moment of their political life.

We call on our party faithfuls to remember our brothers and sisters beleaguered and beguiled in APC, in their prayers for God to open their eyes of understanding.

We believe in the Cross River Project, and we are solely determined to rescue, restore, reclaim and rebuild Cross River State!!

Wed Feb 23 , 2022
Share This By: Admin. Sen. Gershom Bassey reaffirms his title as the Chief Empowerment Officer of Cross River State as he gifts motorcycles to all ward leaders of Biase Local Government Area. The motorcycles were given to the constituents of Biase to aid their mobility and also create a source […] 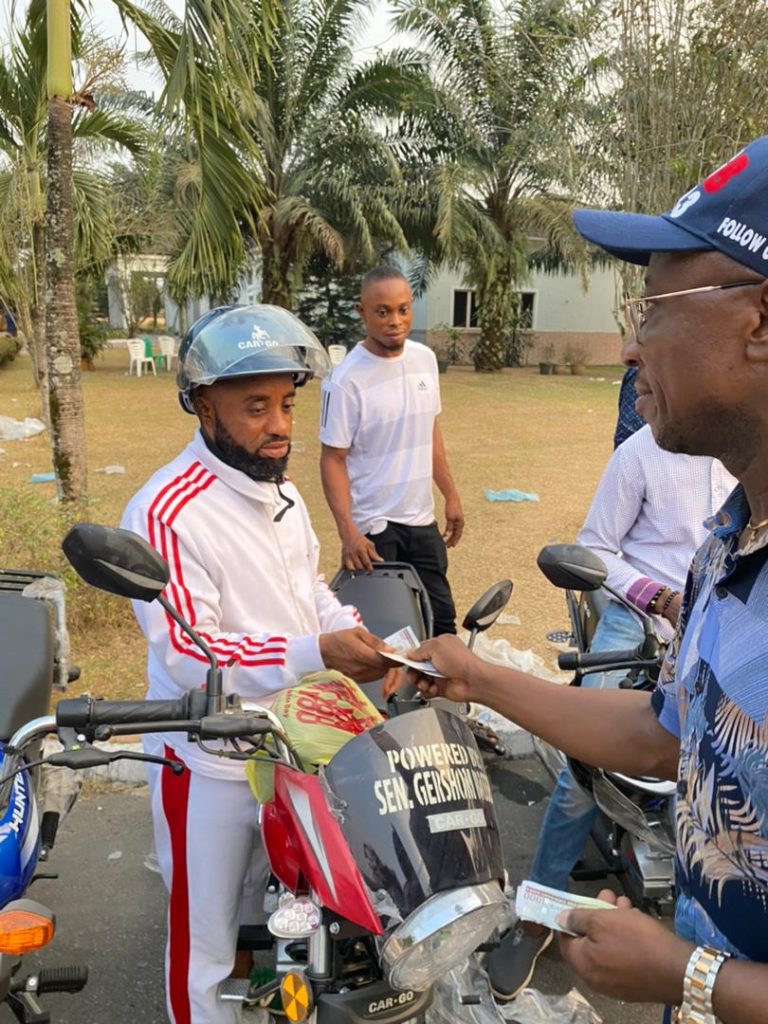