Skip to content
Share This
By: Admin.
Cross River State Ministry of Health (CRSMOH) through the office of the Commissioner, Dr. Betta Edu, had set up an anti-quackery Squad in 2020 led by Dr. David Ushie, to put an end to quackery, one drug cures all, counterfeit drugs, illegal medical practices, sharp practices amongst others that has led to death of thousands of Cross Riverians.
The Ministry which had shut down over 11 hospitals in different parts of the state has frowned at the arbitrary and illegal advertisement of herbal medicines and even fake medical outreaches in Cross River State. 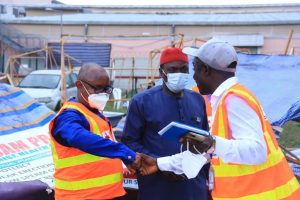 This action has continuously vexed the the State Government, which through her Taskforce on Quackery and counterfeit drugs has promised to sanitise the health system, especially at a time the quacks have infiltrated some parts of the State selling the fake medicines to gullible members of the public.
Addressing the situation on Thursday the State Commissioner for Health, Dr Betta Edu, disclosed that the excesses and unethical advertisement of herbal medicine products , “one drug cures all Herbal medicines or traditional medicines is unacceptable “The State Ministry of Health is statutorily mandated to regulate and control their activities with other relevant Government agencies such as NAFDAC.”
Dr Edu, added that herbal products must be evaluated by the approved authorities before they can be sold. traditional medicine vendors should comply with the State Government and relevant agency’s to get registered and obtain certificates before advertising their products. “such products must undergo mandatory laboratory evaluation The Cross River State Government is ever willing to strengthen the health system in its mandate of safeguarding public health”
The Commissioner warned that the State Government will not hesitate to sanction  and punish any unethical practice detrimental to public health and environmental safety as it is committed to safeguarding people’s lives. 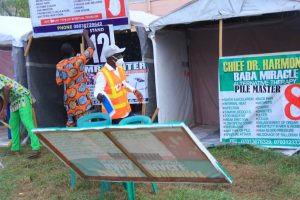 The taskforce led by the Special Adviser to the Governor on Health, Dr Ushie David had discovered and completely destroyed the illegal camps set up by unlicensed trado-medical trade fair organizers who arrived the State and set up tents at the Cultural Center, Calabar on the 17th day of January 2022.
Instead of dismantling and leaving the State as ordered by the taskforce team, more of them arrived at night and continued the setting up of canopies for such illegal business. Faced with this belligerent behaviour on the part of the offenders, the State team mobilized and coordinated the complete destruction of their tents and canopies, and forcefully effected their evacuation out of the Cultural center and the State with proper plans put in place by the team if they resettled anywhere in CRS, the Special Adviser Dr David Ushie has promised their arrest and prosecution as second offenders.
The State Health Commissioner Dr Betta Edu who inaugurated the team a couple of Months back mandated the taskforce team to fish out quackery in the health sector with full support from the State Government and the Health Ministry.
“We’re not ignorant of the fact that some persons have decided to indulge in quackery where they pride themselves of curing all illnesses with a certain concussion whereas these are people who are practicing without license and some are not even medically inclined. It is therefore necessary for the safety of all cross riverians that a taskforce team continue to comb the State and fish out these people and so far, the result has been encouraging. this will continue!.
Speaking during the dismantling of the said tents, Dr Ushie David stated that their activities are illegal as they never got the approval of the State ministry of Health. “They’re all quacks and are practicing illegally. We’ll continue to chase them out as our hospitals and health facilities are equipped enough to offer medical services for our people. The fight to put a stop to quackery in the State began in 2020 as the government of Sen. Prof. Ben Ayade through the Honorable Commissioner for Health has given us everything we need to achieve this goal. We must avoid these people so we don’t bring careless and avoidable health challenges to our people.”
Cross Riverians are therefore advised not to buy or patronize anyone who walks round the street with claims of having a solution to typhoid, malaria, cholera, dysentery and even HIV/AIDS etc with the said cure coming from a particular drug or concussion. Instead, visit any nearby health facility for proper medical services and care.

OGOJA/YALA HoR BY-ELECTION: CHIEF HENRY SUBMIT APC FORMS, AS HE INSIST NOT TO HAVE STEPPED DOWN.

Mon Jan 24 , 2022
Share This By: Emmanuel Unah. Chief Henry Onwe,  the leading of the three  remaining  aspirants on the platform of the All Progressives Congress, APC,  for the Ogoja/ Yala House of Representatves position in the National Assembly  on Monday submitted his Declaration of Interest and Nomination forms in readiness for the […] 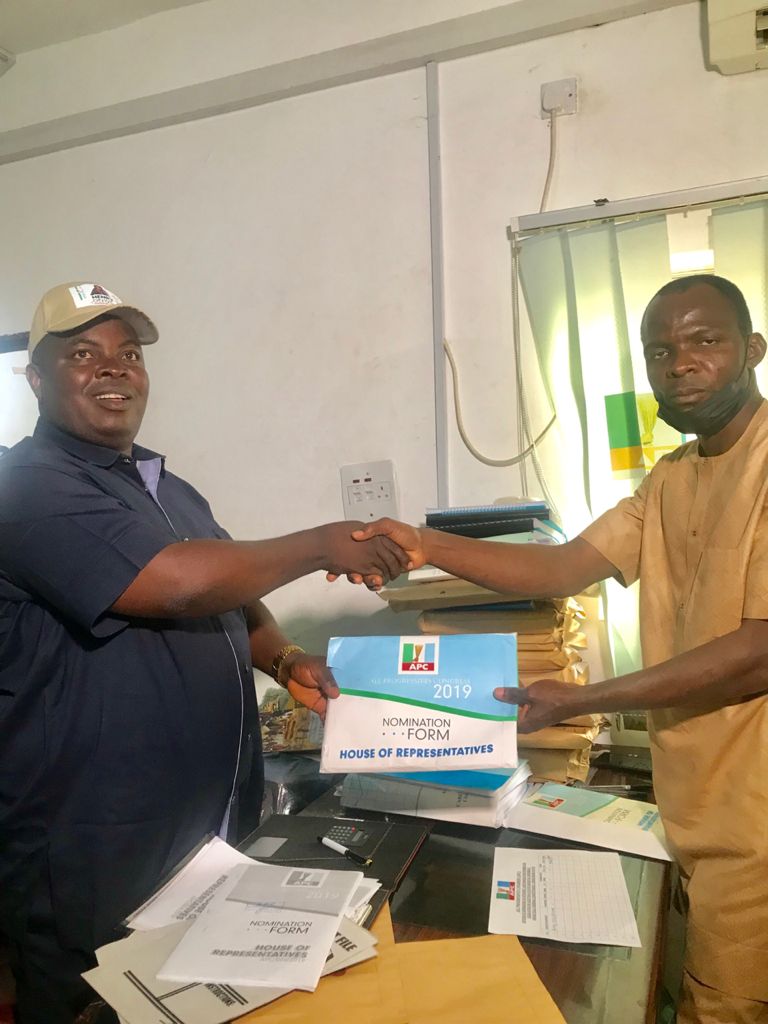