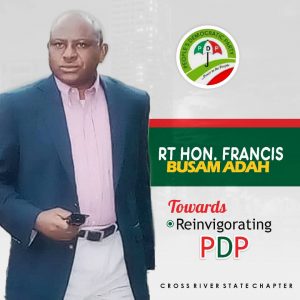 HE Rt. Hon. Francis Busam Adah, former Acting Governor, and Speaker and one time, member of the House of Representatives, has withdrawn from the contest of State Chairmanship of the People’s Democratic Party (PDP) in Cross River State, even having been cleared since last year alongside, Barr Alphonsus Eba, ahead of Barr. Vena Ikem.
His decision to throw in the towel is never unconnected with the intervention of Party stalwarts in the Northern Senatorial District that includes, former and first PDP National Publicity Secretary, Hon. Emmanuel Ibeshi, Senator-Elect, Cross River State Northern Senatorial District Rt. Hon. (Sen) Jarigbe, Agom Jarigbe, and Host of others that prevailed on him to step down not because he’s not eminently qualified, but for PDP strategic planning.
Others Stakeholders included, Rt. Hon. Moses Ucheche, former Leader of the Cross River State House of Assembly, Mr. Peter Akpanke, Barr. Vena Ikem, and Host of Elders.
Read full text below:
“1. I wish to formally inform ever patriotic  members of our great party, the PDP in CRS, and my teaming supporters of my decision to withdraw from the race to contest for the post of Chairmanship at the forthcoming State Congress slated for Saturday, 18th September, 2021 in Calabar.
2. This is another very difficult political  decision and sacrifice I have to take, being the outcome of intensive internal democratic conflict resolution  mechanism of the PDP.
3. I sincerely thank the leadership of our great party in the state who have individually and collectively been part of what has culminated in this decision. I equally appreciate their kind words of remarks on my sacrifices and commitment to our party at the Local Government,  State, and national.
4. I like to particularly thank our Distinguished Senator elect, Jarigbe Agom Jarigbe, for his very wise counsel and friendship displayed all through the process.
5. I sincerely thank Hon. Emmanuel Ibeshi for his statesmanship and role along with many other party elders  from across the state who demonstrated uncommon resolve for a united PDP in the State.  I am very grateful to you all.
6. To all my teaming friends and  associates, I pray God Almighty to bless you all for the exceptional display of solidarity throughout this period.
7. Finally, I congratulate my friend and brother, Barr. Venatius Ikem, who without doubt, is eminently qualified and ready to serve our party as State Chairman. I wish him a very successful tenure. I urge all my supporters to give him the needed support and cooperation.
8. As always, I pledge my commitment  and loyalty to the PDP. I am confident that 2023 will see our party restored to every position we have always occupied in the Local governments,  State, and the nation.”
Long Live the PDP!
Long Live Cross River State!!
Long Live the Federal Republic of Nigeria !!!
Signed:
Rt. Hon. FRANCIS BUSAM ADAH
Gwarinpa, Abuja
Nigeria.

Wed Sep 15 , 2021
Share This    By: Olamilekan Olusada. S.A Media and Publicity.   The Chairman, House of Representatives Committee on Diaspora, Hon. Tolulope Akande-Sadipe has berated the Nigerian law enforcement agencies, the Police Force and the weak Judicial system, which in turn has indirectly aided the high level of impunity by human […] 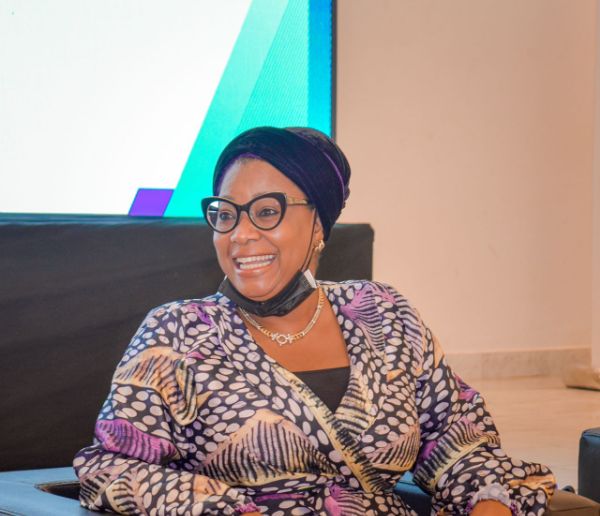