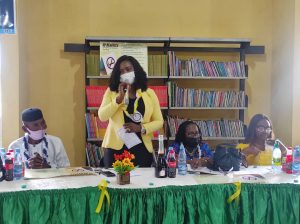 The annual 31st May celebration as set aside by World Health Organization for World No Tobacco Day 2021 was marked with the Theme: “Commit To Quit” in Calabar, by the Director General of the Cross River State Primary Health Care Development Agency (CRSPHCDA) Dr. Janet Ekpenyong, at the Army Day Secondary School, Ikot Ansa. 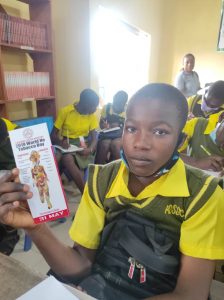 For over 30 years, the world Health Organization and it’s member states have seek ways of cubbing the growing incidences of tobacco usage across the globe, employing best practices like sensitization on the dangers of its usage among the young and old.
In an event to  mark the “World no Tobacco” day celebration in calabar, the Cross River State Capital, teenagers and school children were the target, as the goal was to teach them early the devastation that awaits tobacco consumers.
Speaking in Army Day Secondary School, Ikot Ansa Calabar, Director General of the Cross River State Primary Healthcare Development Agency reminded the students that “You all have no business experimenting with drugs of any kind, be it tobacco, cannabis or hard drugs”. 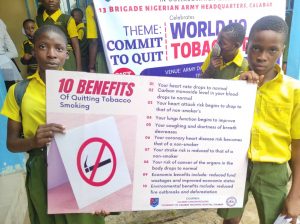 She said, drug is a killer of dreams, shortener of life and pathway to self destruction as she urged them to shun every wrong company that seek to introduce them to the use of tobacco.
“I have never seen anyone who goes into drug and end up being something meaningful in life, the best you can do for yourself is to focus on your studies and be of good conduct in order to become productive in the future.
The State Governor, Senator Ben Ayade has ensured that students get the best of healthcare as well as education, this should at least serve as a reminder that you all have a society that cares about you.
She further enumurated various effects of tobacco consumption including cardiovascular disease, cancer as well as mental illnesses to them as she thanked the Calabar Cancer registry for collaborating with the Agency to raise awareness.
Director of the Calabar Cancer Registry, Professor Ima-Obong Ekanem said the growing concern on  tobacco use can be attributed to indescriminate use of these products by perceived “role models” who have continually influenced young people negatively.
She urged those who have already begun smoking to quite noting that “quitters are winners” as that will enhance their heart beat, immunity and brain cell formation as well as degeneration of  cencer cells.
Principal of the School, Mrs Emem Etim applauded the efforts of the organizers as she noted that the gesture will remain fresh in the minds of the students and assist them in making right choices as it concerns their health and social life.
She promised to continually make ready opportunities for students where they will will learn more extra-curricular activities but  essential for their growth and development.
Some students who spoke thanked the school management and organizers of the event for the knowledge impacted upon them as they promised to remain good and law abiding citizens.
Also in attendance was Special Adviser to the Governoron on Health, Dr David Ushie, representative of the Commissioner for Education , members of the military Community, staff and students of the Army Day Secondary School Ikot Ansa, Calabar Cancer Registry among others.

Wed Jun 2 , 2021
Share ThisBy: Kola Ologbondiyan. PDP National Publicity Secretary. The Peoples Democratic Party (PDP) berates the All Progressives Congress (APC) for attacking Rivers State Governor Nyesom Wike, for exposing the failures of the APC and its administration, particularly their ignoble roles in the escalation of violence, killing and other acts of […] 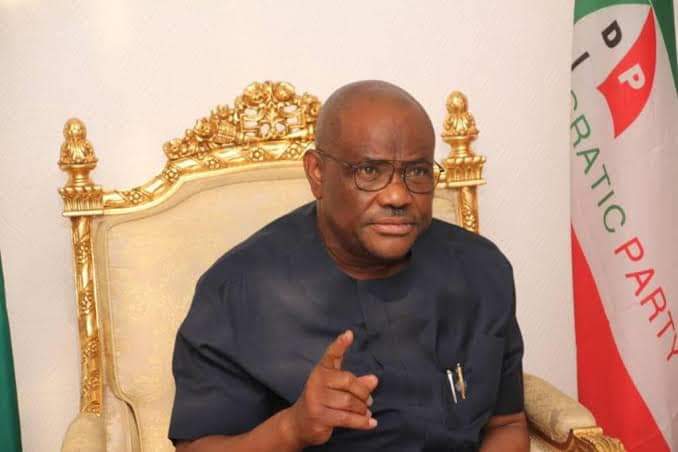