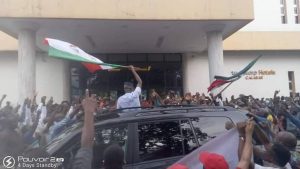 A former Cross River State Governor and Leader of the PDP in the State, Senator Liyel Imoke, CON, alongside PDP National Assembly Caucus, Party Stakeholders held a Press Conference on Sunday 23rd of May, 2021, in Calabar at the Transcorp Hotels, where he told a mammoth party faithful’s that, Governor Ben Ayade’s defection to the All Progressive Congress (APC) is divine, as stability returns while debunking social media and advertorials that Cross River with the decamping of Ayade, is APC.

According to Sen. Imoke, for the avoidance of doubt, as facts don’t lie; Cross River State is a complete PDP stronghold and no going back. He debunked the insinuations that he was given 2billion naira to imposed Ayade on the Party and as Governor.
“What an insult? And it will be very wrong for anyone to peddle such accusation against my person. When they came, did they even have money for the election, and now they want to damage your name and reputation. I have been insulted enough.
“I usually don’t talk too much and as a leader, I wouldn’t want to be seen as fueling crisis in the State.

Continuing he said, “Let me thank you, let me welcome you, let me express my pleasure that God in His infinite mercy has seen the challenge of Cross River State and proffered His solution, for power belongs to the people. I have pondered and wondered about the future of Cross River State. It has been on my mind for many years and for many reasons, but today, I feel that there’s divine intervention because I believe very strongly when we on our own did not ask anyone to leave the Party but on their own volition they left our Party; on matters of such nature, what you see is the Hand of God and that is what I have seen.

“I never participated in Ward Congress, Local Government Congress; why do I have leaders? We have leaders at every level and they took responsibility for the Party, and we held them accountable and they delivered.
So, when I hear, when Imoke was there, when Liyel was there, this is what he did. You know it is not true. I have never sat down to write a list in my entire political career but the Party. 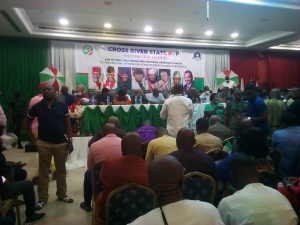 I am a beneficiary of the Party and more important than being a founding member of the party. We had one United PDP in Cross River State. No seat was ever lost. It was one party. Now, they want to divide us, but I can see that, they have failed, which is an opportunity for me to say, thank you!

“They are men and women, young youths who stand firm and they are standing here behind us. I want to honour them, I really need to honour them because in circumstances like this sometimes for one reason or the other, whether we call it food on the table or any other reasons they could not have stood up and we may not have what we have as a party.
So, let me please ask everyone in this room and on the high table to rise up, let me salute you all! I am so proud of you, so impressed and so fantastic! And this is what I have been talking about; we must bequeath this legacy to the youths. This party, 2023, we are handing over to the youths. But we want youths of integrity, youths that can stand and stand firm. Youths that can deliver, that can grow, that can takeover. Amongst us here, they are still youths.

“Any good party will understand the importance of generational shift. And the time has come for generational shift, and God forbid that the next governor will be a food on the table governor.
The next governor will be someone we can trust. Next Assembly members will be people of character, and the National Assembly members will be people of character and they will be youths, men and women. We are taking the party back to where it was. Who does PDP belong to? Simply the good people of Cross River State. It is not time yet, to talk for the crocodile not to reveal it secret and strategy, but only to put everyone on notice that PDP is BACK!

“And for those who don’t come from Cross River State, I think they should come to understand that Cross River State is a PDP State. Let them understand that the movement of one person does not change that fact that even amongst those who did not move and those who moved, have not joined. You know I have been a governor before and I serve my people diligently and with everything I have. I am so glad to see you. If, I had failed, I’ll not be here today because I provided what the people needed to better their whole lot and we gave it to them.
Now we are beginning to see the different approach to governance. It is not in our character, it is not democratic and at this point in time, I have to come back. I thought I will be retiring to have handed to some people thinking they will keep the tradition but they did not and thought we did not know anything; so we have come back either as a tortoise, fox, caterpillar, eagle or anything.

“The beauty of our politics is that it is sweet. We don’t play politics of fear, intimidation, and harassment. So for those who are not from Cross River State, and who think that what they see in social media or announcements that PDP is dead. This party will never inflict untold hardship on its citizens, insecurity, economic woes, bring disunity; it that where you want to go or the best option? No it is not for Cross River.
“What we are going to do now as a team, is to work together as one. You people will take the party and the Caretaker Committee is only going to be in place for 60 to 90days, during that time, we are going to rebuild the party and even bring back all that have ran away for one reason or before now. They will come and participate in our process and rebuild the party for Cross Riverians that we all will be proud of.

“I am going back to the drawing board and not just me but us. Thank you for holding forth and let the message be taken to all and sundry that, Cross River State, is PDP! God, bless you all,” he concluded.

One thought on “ AYADE DEFECTION IS DIVINE, STABILITY RETURNS AND CRS IS PDP-LIYEL IMOKE.”

Thu May 27 , 2021
Share This By: Simon Ushie. Aside Natural disasters like volcano eruption, windstorm and flood, wars have forced many people out of their ancestral homes exposing them to limited access to healthcare and social services. This ordinarily should be the story of the over 40,000 refugees of Cameron origin scattered across  […] 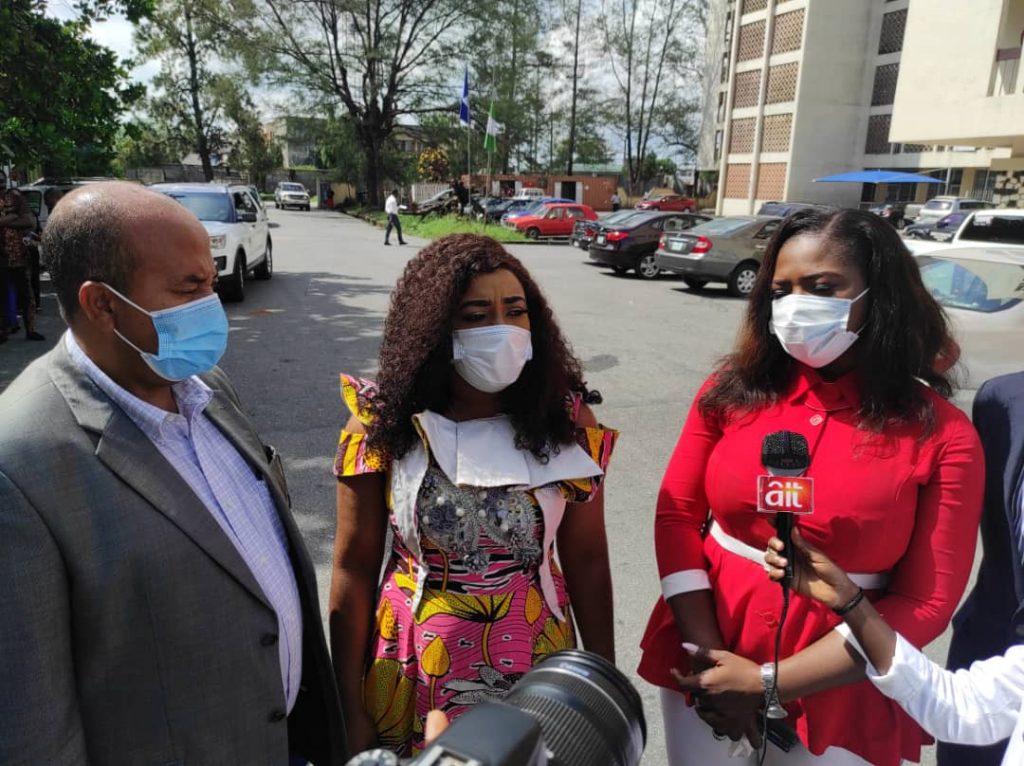