A coalition, Civil Society Groups for Good Governance, CSGGG has lamented over what it called ‘politics of witch-hunt’ in Cross River state ahead of the 2023 general elections.

The group was reacting to recent media reports claiming a former official of the Economic and Financial Crimes Commission, EFCC, Peter Akpanke, was dismissed from the anti-graft agency.

Akpanke who is from Obanliku local government area is gearing up to contest for the Bekwarra/Obudu/Obanliku Federal Constituency in Cross River State in the 2023 polls.

The CSGGG in a statement released on Tuesday, May 11, 2021, in Abuja said the timing of the media attacks on Akpanke is suspicious and an attempt to tarnish his hard-earned image.

”Peter Akpanke was never dismissed from the EFCC. He did his job diligently, had a good working relationship with the EFCC, and recorded so many convictions during his time with the anti-graft commission.

”He was never dismissed from his job. Members of the public are enjoined to find out from the EFCC themselves to erase any doubt.

”Those that are pushing this narrative are unpopular candidates who are afraid of his popularity. If they are popular, they should come out and test their popularity.

”This is politics of 2023 and an outright witch-hunt against a philanthropist, politician, and socialite per excellence.

COMMUNIQUE ISSUED AT THE CONCLUSION OF THE MEETING OF THE GOVERNORS OF SOUTHERN NIGERIA IN GOVERNMENT HOUSE, ASABA, DELTA STATE, ON TUESDAY, 11TH MAY, 2021.

Tue May 11 , 2021
Share This  By: Admin. At its meeting, held today, 11th May, 2021, the Southern Governors Forum reviewed the situation in the nation generally and focused on the current security situation, agitations/restructuring, prospect for inter-state collaboration and partnerships as well as on the incidence of the COVID-19 Pandemic. Rising from the […] 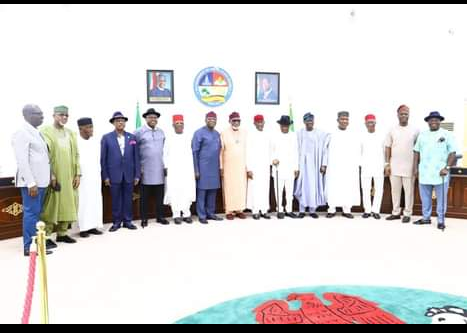