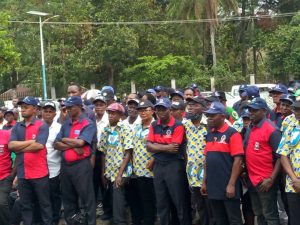 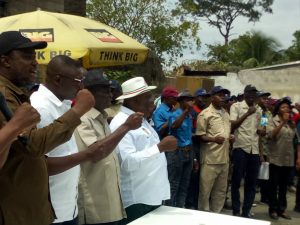 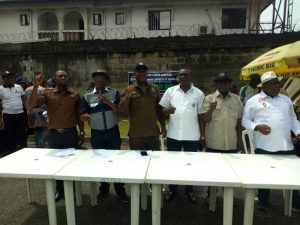 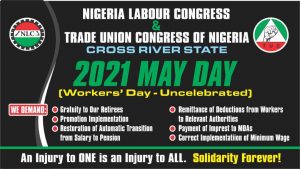 The Cross River State Chapter of the Organised Labour join their counterpart nationwide to mark the 2021 Workers Day, otherwise refer to as May Day at the Freedom Park in Calabar, with the Theme: COVID-19, Social and Economic Crises: Challenges for Decent Jobs, Social Protection and People’s Welfare, but it was Uncelebrated. Hence, in solidarity of the kidnapped NLC Chairman, Comrade Ben Ukpepi.

According to Comrade (Barr) Lawrence Achuta, NLC Vice Chairman, who now doubles as the Acting Chairman said, “International Workers Day is a day of fanfare, joy, laughter and celebration for workers and working people across the World. As you all are aware, the 2020 edition was ravaged by the COVID-19 pandemic which held the entire World to ransom and putting an end to economic and social activities.
“The 2021 has been made worse with the kidnapped of NLC Chairman, Comrade Ben Ukpepi, on March 21st, 2021, from the Civil Servant Estate in Akpabuyo. The Chairman, a man who cannot hurt a fly has been in the hands of his abductors, some cruel and unrepentant gang of perfidious criminals. So, today, we are not celebrating but sorrowing instead. And as we agonized, we pray that wherever the evil men have taken him, he is safe.

Comrade Achuta, Esq. commended Operation Akpakwu for their dexterity since formation in the Metropolis but appealed that they extend their dragnet to the suburbs.
“I want to use this occasion and in this very somber mood to charge the Government and Security Agencies to do all that is necessary to ensure the safe return our Comrade, the NLC Chairman.
“Furthermore, while we commend the achievements of Operation Akpakwu in stemming the rate of kidnapping and other criminal acts in Calabar metropolis, we call for the extension of their

operations to Akpabuyo, Bakassi and environs as these criminal elements have made these places their haven. We equally call on the State Government to do more in the security of lives and properties of the citizenry as this remains the cardinal obligation of Government.”

Continuing, Comrade Achuta, Esq. said the State Councils of the Trade Union Congress (TUC) and the Nigeria Labour Congress (NLC), understand the burden of Government, but that they Government should appreciate the magnanimity of NLC and TUC. Hence, they should keep to their promises and request His Excellency, Sen. Prof. Ben Ayade, to direct the implementation of State Councils demands, forthwith.
“The Demands of State Councils for Organised Labour and for immediate implementation are:
1. Payment of Gratuities to Retirees.
2. Suspension of Automatic Transition to Pension Payroll.
3. Implementation of Promotion.
4. Payment of the Balance of National Minimum Wage.
5. Remittances of Deductions from Workers’ Salaries to Beneficiaries in arrears of 4, months.
6. Financial Autonomy for the Judiciary and Legislature.
7. Ban on Payment of Union Dues by Commercial Drivers and Tricycle Operators.
8. Return of Motor Parks to NURTW.
9. Return of Weigh-in-Allowances to Radio, Television, Theatre Arts and Paper Printing Workers in the State,” he demanded.

He appealed to fellow Comrades not to despair but have hope no matter the current situation and to Government that, Labour, will not rest until their demands are urgently being attended too.
“Comrades, Ladies and Gentlemen, we are in no mood for celebration, we have been dealt a heavy blow and may be down, but I want to assure all Civil/Public Servants that, we are not out.
“Sorrow may last for a night, but joy comes in the morning, so says the wise book.
“As Organised Labour, we have agreed that the struggle continues. All the litany of issues enumerated above must be addressed by this Government. We shall not rest on our oars until this is achieved,” he concluded.
The Address was co-signed by Sir (Comrade) Monday U. Ogbodum, KSJI. Chairman, TUC.

Highpoint at the Freedom Park was the reading of the May Day Address from the National, NLC and various Speeches from representatives of Affiliates and the Retires.

Mon May 3 , 2021
Share This By: Emmanuel Ulayi. The Cross River State Government and partners have flagged off the Supplementary Maternal and Neonatal Tetanus Elimination Campaign in Akamkpa Local Government Area with a target to reach all women of child bearing age with the Tetanus Vaccine which provides protection for mother and child. […]