To strengthen the fight against corruption and reform the criminal justice system in Nigeria, The British Council through the Rule of Law and Anti-corruption (ROLAC) programme in collaboration with the Cross River State Judiciary has organized a one-day workshop for Law Officers on Plea bargain and Sentencing Guidelines.

The workshop which was to improve Law Officers’ knowledge on the import and use of the Sentencing Guidelines held recently at Dannic Hotel, Calabar.

Mr Ashang said the plea bargain practice as contained in the administration of Criminal Justice Law of Cross River State is not entirely understood by law enforcement agencies, law officers and the general  public and this training, amongst other things, will go a long way to change that.

A Consultant with the British Council, Mrs Mercy Onoriode stated that the workshop was necessary not only to harness on the gains of modern trends in criminal Justice administration but also to make it more efficient.

Reiterating the importance of the training, Dr. Elijah Okebukola, Consultant British Council said “Cross River State pioneered the use of the sentencing guidelines in Nigeria by being the first state in the country to adopt the sentencing guidelines in 2016 but it has not been in widespread use because the stakeholders do not have a very good understanding of how it works.”

” So this workshop organized by the British Council under the ROLAC programme was necessary to sensitize the players; Judges, Magistrates, Defense Counsel and Prosecutors on how the sentencing guidelines work.”

Dr Okebukola further stated that the workshop has been able to dispel misconceptions associated with the use and practice of plea bargain.

According to him, “There is a very big misconception that plea bargain is meant for the high and mighty particularly in high corruption cases, but from our discussions we have been able to denote that plea bargain is not only particularly beneficial to the common man but might not be in the interest of the political class. So contrary to the belief that plea bargain is for the political class, it is actually not in their best interest because every plea bargain results in a conviction and once you’re convicted in Nigeria you cannot run for political office, or hold top positions in a company. There are so many things that you are precluded by law from engaging in. Once they get judgment through a plea bargain they can no longer enjoy the trappings of political office but the common man who is convicted can still go on with his life,” he explained.

Speaking on the benefits of the use of plea bargain and sentencing guidelines in the administration of criminal justice, Mr James Ibor, Secretary Justice Sector Reform Team, Cross River State, said plea bargain will help to ensure certainty in convictions, expedite trials and the sentencing guidelines will ensure uniformity in judgment, leaving no room for courts to sentence convicts arbitrarily for the same offences under similar circumstances.

“There has been a lot of wide, sometimes absurd differences in sentences. Somebody commits the same crime, in one court he is given 10 years imprisonment, in another court you have 6 months, that disparity is absurd. Having a guideline will help to guide presiding officers on how best to impose sentences and entrench fairness and objectivity in sentencing of persons convicted by courts,” he emphasized.

Mr Ibor further stated that this will improve service delivery and restore public confidence in the judiciary which would in turn lead to a decrease in violent self-help and extrajudicial killings.

Describing the workshop as enlightening, one of the participants Miss Joy Ikpeme, State Counsel, Cross River State Ministry of Justice, said the training has equipped law officers with useful insights on plea bargain which she noted is novel and has not been explored.

She further appealed that more trainings should be organized to equip Law Officers on modern trends in the administration of criminal justice and other procedures.

Sat May 1 , 2021
Share This    By: Comrade Amawu, Amawu. The Cross River State Chapter of the Organised Labour join their counterpart nationwide to mark the 2021 Workers Day, otherwise refer to as May Day at the Freedom Park in Calabar, with the Theme: COVID-19, Social and Economic Crises: Challenges for Decent Jobs, […] 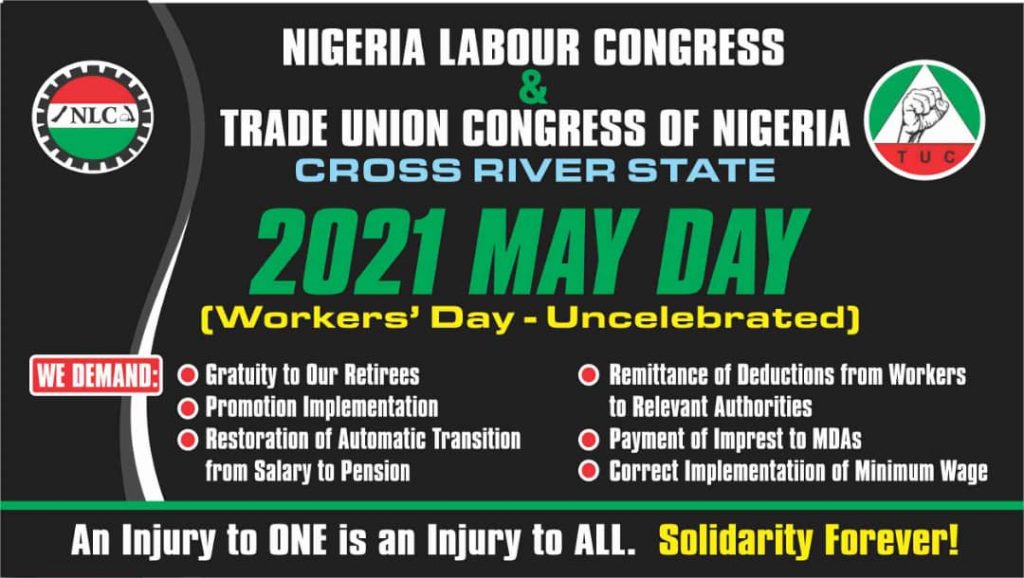