The Medical Director of the Federal Neuro-Psychiatric Hospital, Barnawa, Kaduna State, Prof. A.J.Yusuf, has been petitioned for Fraud, Nepotism, Breach of Public Procurement Act 2007, Embezzlement of Public Funds and causing disaffection amongst staff with his religious bigotry and tribalistic administrative practices as never been recorded in the history of the Hospital.

It is on record that, Nepotism and illegal Employment of Senior Staff on Locum has been the order of the day.

Wasteful Expenditure in the Hospital due Nepotism practice in 2019.

Religious bigotry and breach which has brought the Hospital to public disrepute and ridicule, hence, polarized staff on ethnic, religious sentiments, a situation that has equally affected productivity amongst staffers.

Prof Yusuf, is been accused in the petition for breaching Section 41(2-5) of the Public Procurement Act, 2007, state thus:

3b. Each contractor or supplier from whom a quotation is requested shall give only, one (1) quotation and shall not be allowed to change or vary the quotation.

In view of the Petition, EpistleNews, cited fraudulent Documents on the subject in a procurement process dated March, 2019, where the Medical Director, Prof. A.J. Yusuf, altered a bid winner for his interest in the procurement of one (1) AC900 Electrolyte Analyzer (Audicom) in favour of Echas Scientific Nig. Ltd.

Three (3) quotations were received for the said procurement from;

On the 12th of April, 2019, the Procurement Unit of the Hospital raised a memo and recommended for the procurement of the said Electrolyte Analyzer from Bijo Surgical & Scientific Company Ltd. being the lowest responsive bidder. The memo was however minuted to the Audit Unit of the Hospital for vetting. The Audit Unit carried out a market survey and sent the file back to the Procurement Unit on 15th April, 2019. The file was subsequently minuted to the Medical Director for further action (see attached Appendix “A”), and no action was taken.

But on the 16th of April, 2019, the Head of Medical Laboratory Department sent a memo to the Medical Director indicating that he negotiated with Echas Scientific Nig. Ltd., and the Company has further reduced the amount quoted to Two Million, Three Hundred and Eighty-Five Thousand (#2,385,000.00) Naira only. (This action of the MD clearly violates the Procurement Act, and may have led to litigation against the Hospital). The Medical Director quickly gave approval for the purchase of the Electrolyte Analyzer from the said Echas Scientific Nig. Ltd. (see attached Appendix “B”) despite the fact that the amount quoted by Echas Scientific Nig. Ltd., was the highest and the said Company does not deal with Hospital laboratory equipment, reagents and consumables, rather, deals on School laboratory equipment.

Further investigation reveals that, Echas Scientific Nig. Ltd., procured the equipment from one of the bidders.

There are also several other contracts that has been awarded to the said Company (Echas Scientific Nig. Ltd.) without due process been followed and this is an offence in the PPA., 2007, and upon conviction, it is punishable by law by dismissal from service and a minimum sentence of five (5) years in jail with no option of fine (PPA. 2007, Sect. 58, Sub-Sect. 5).

This has further proven the corrupt practices of the Hospital, Medical Director to the detriment of norms and lead down rules. Hence, why Echas Scientific Nig. Ltd., has been favoured in all contract awards as it relates to Laboratory equipment, reagents, consumables and EEG equipment. (See attached PPA. 2007, Section 58, Subsection 4a & b tagged “Appendix C”).

Prof. Yusuf, proclivities for abuse of office and corrupt tendencies rear its ugly head again in the COVID-19, Capital Intervention Project, ongoing in the Hospital, as investigation shows that the three (3) contracts under construction were awarded to friends and family of the Medical Director without due process and with two (2) projects awarded to one contractor. Four (4) contracts are also awarded to Echas Scientific Nig. Ltd., in respect to the same project.

Investigation shows that over Four Hundred and Fifty Million (#450,000,000.00) naira only has been spent on the project with little or nothing to show for the huge money disbursed.

Payment of 15% mobilisation fee were made to some contractors believed to be the Medical Director’s agents without the mandatory 1% stamp Duties, 5% Withholding Tax and 7% VAT deducted as at the time of payment. This was done to facilitate these Companies believed to be owned by his agents who front for him so that the projects would be funded all through with Government funds because these contractors lack the financial capacity to carry out any public procurement which is a prerequisite for the award of contract to any contractor.

And for all payments on the projects, the 1% compulsory stamp duty payment for all contracts was not charged and none of the contractors has made any payment to the Federal Inland Revenue Service (FIRS). This amount to robbing the Federation of over the sum of Four Million, Five Hundred Thousand (#4,500,000.00) naira only.

Section 36 of the Public Procurement Act, 2007, states that, “contract performance guarantee shall be a precondition for the award of any procurement contract upon which any mobilisation fee is to be paid provided however, it shall not be less than 10% of the contract value in any case or an amount equivalent to the mobilisation fee requested by the contractor or supplier, whichever is higher.”

Consequently, for all the contracts awarded for the COVID-19 Intervention Project, no contract performance guarantee was requested from the contractors by the Medical Director.  He only requested for Bank Advance Payment Guarantee or Insurance Bond and these are entirely different from a Contract Performance Guarantee.

Another grey area of concern since his assumption of office as the Medical Director is the Illegal Employment of Nineteen (19) Senior Staff on LOCUM. Rather than following the due process, Prof. Yusuf, did not only employed nepotism but illegality as well. Hence, done without approval of the Supervisory Board and Budget Office of the Federation. This is with exception to numerous junior Staff that have been employed by him. Most of whom belong to his tribe and religion sect, negating Federal Character and Merit.

These individuals are placed on contract employment on month to month basis. However, since their assumption of duty, no agreement has been renewed which contravenes the Public Service Rules. (See attached list tagged, “Appendix D”).

This recruitment was carried out single handedly by the Medical Director without input from the Administration Department and Human Resources Unit.

These Locum Staff are on full salary.

Since inception as the Medical Director of the Hospital, Prof. A.J. Yusuf, has succeeded in dividing the entire staff of the Hospital along ethnic and religious lines.

This is evident in his reconstitution of all Committees where his pre-requisite of joining any Committee in the Hospital is tribe and region. These Committees includes; The Anticorruption Unit (ACTU), School of Post-Basic Committee on Accreditation and Special Works, which is headed by a non-professional, while a professional is just a member, just to mention a few. It is pertinent to state that millions have been paid into the Account of the Chairman of the Committee and this is in violation of the Public Procurement Act, 2007.

The Medical Director keeps harassing Southerners asking them why they are not working in their respective States. He constantly reminds them that they have no stake in the North, despite the fact that the Institution is a Federal Institution and should reflect Federal Character. He only associate with staff members who are of his tribe and religion, while he treats others as outcasts. This has made the atmosphere in the Hospital very volatile and as it is, the Hospital is sitting on an ethno-religious time bomb which can explode at any time if, urgent action is not taken against him.

It should be noted that, Nepotism, is the highest form of corruption.

Even with the Freedom of Information Bill signed into Law, you hardly will access any information under the leadership of Prof. A.J. Yusuf, as Medical Director of Federal Neuro-Psychiatric Hospital, Barnawa, Kaduna State.

These complete Hoarding of Official Document, and since joining the Hospital in 2018, all legal, procurement and selected Staff files are in custody of the Medical Director despite the fact there is a Registry Unit which is supposed to be the custodian of all official files. The reason behind this is because the Medical Director does not want anyone to have access to all his illegal, mischievous and fraudulent dealings. This is important to state that, Suppression of Record and Withholding of Official Files is a serious misconduct, according to Public Service Rule 030402.

And Section 20, Subsection 2, of the Public Procurement Act, 2007, clearly states that the procurement process of any procurement entity solely rests on the Accounting Officer, who is the Medical Director and he is liable in person for the breach or contravention of the Procurement Act whether or not the act or omission was carried out by him personally or any of his subordinate.

Wasteful Expenditure in the Hospital Due to Nepotism:

Sequel, subject, the Hospital acquired an automated medical waste incinerator, and one Mr. Yusuf Bolakale Akande, was trained to man the machine. However, no sooner than the Medical Director (Prof. A.J Yusuf) resumed office, he immediately replaced Mr. Akande Yusuf with one Abdullahi Sani, who was never trained to operate the incinerator and this was due to Nepotism and that singular action of his, redeploying a professional with an unprofessional, led to the burning of the incinerator and which cost the Hospital about Thirty Million (#30,000,000.00) naira.

This loss was avoidable but the Medical Director was blinded by tribal sentiments and nepotism.

This is despite the fact that he is the senior and a professional in construction. Millions of Naira have been paid into the Account of Yakubu Gombe for Special Works and renovations. This is against the provisions of the Public Procurement Act, 2007. It also involves contract splitting.

On this premise, the petitioners are requesting that; A Committee of highly reputable Nigerians, who will NOT be bias and cutting across all ethnic divide should be setup to carry out an independent investigation on the said projects.

The President, Association of Psychiatry of Nigeria (APN).

The President, Association of Resident Doctors of Nigeria, FNPH-Branch.

The Chairman, National Association of Nigerian Nurses and Midwives, FNPH-Branch.

Sat Apr 24 , 2021
Share This By: Uchino Amatey. To strengthen the fight against corruption and reform the criminal justice system in Nigeria, The British Council through the Rule of Law and Anti-corruption (ROLAC) programme in collaboration with the Cross River State Judiciary has organized a one-day workshop for Law Officers on Plea bargain […] 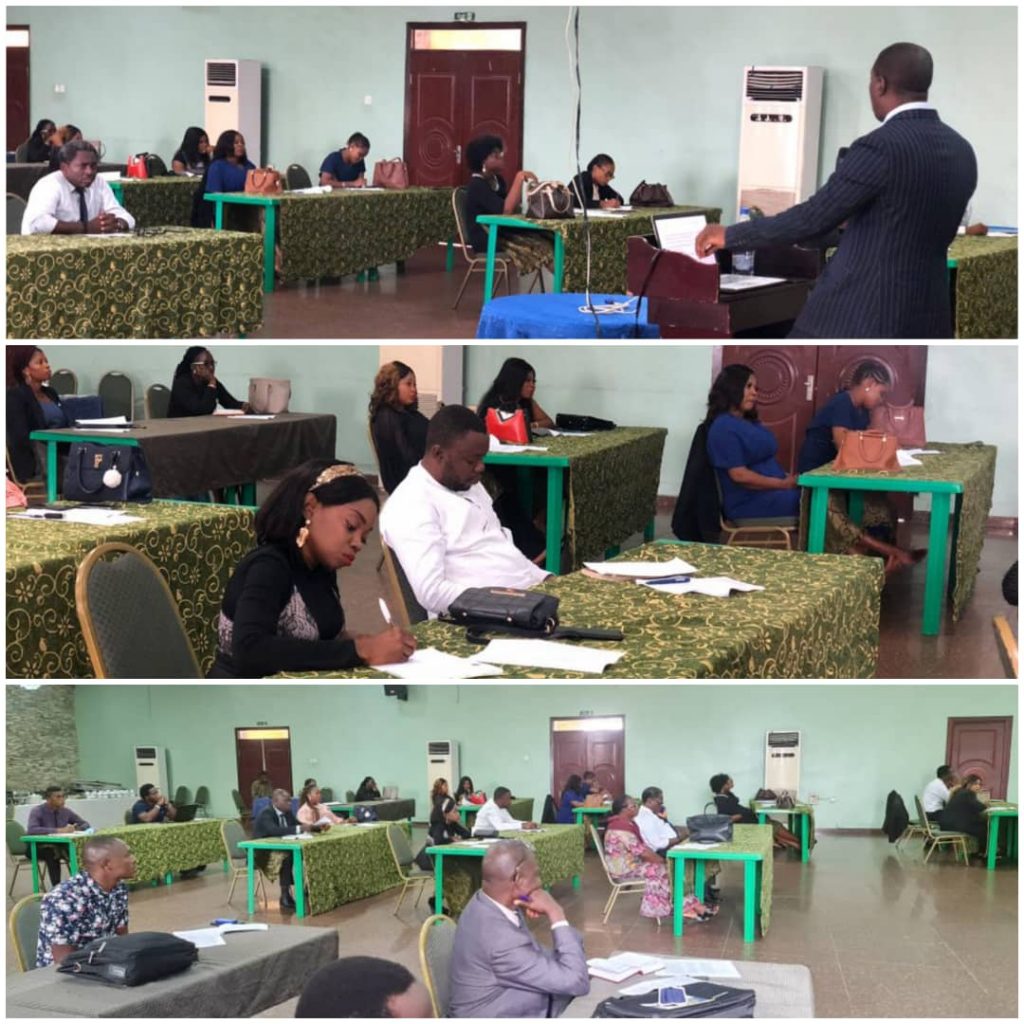