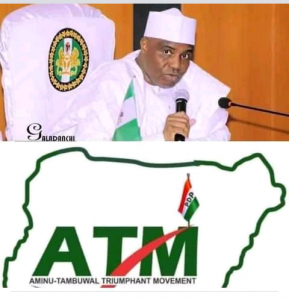 The workaholic Director-General of the foremost Pro- Aminu Tambuwal Group ahead of the 2023 presidency.
The Aminu Tambuwal Triumphant Movement ( ATM), Amb. Eno- Obong Inyang also known as Don- P original, disclosed these today with the newsmen in Abuja,  the goals and objectives of ATM.
He stated that winning a presidential election does not only happens on the ballot box alone but it begins in the minds of the majority.
We must know that winning is in different dimensions, he said.
Hence, The ATM is set to embark on a missionary path to sensitize Nigerians and re-oriented the minds of the populace towards a credible nationalist His Excellency, Rt Hon. Aminu Waziri Tambuwal CFR.
MUTAWALLE SOKOTO
ATM is already undertaking the responsibility of  planting Tambuwal in the hearts of Nigerians and to position him ahead of others in the race.
According to the DG, we are just waiting for the official inauguration at the National level by our principal and of course the campaign managers, which I believe will be inaugurated soon and thereafter, the movement will be known with it’s aims and objectives.
Going forward, he reassured Nigerians that hope is not lost with the coming of His Excellency Alh. Aminu Waziri Tambuwal in the presidential race come 2023, and it’s therefore a great sign of better things to come.
Although, it is obvious that millions of voters does not know what Tambuwal represent and his disposition when it comes to integrity both in public and in private approaches, and when Nigerians are aware of his charismatic style of leadership and that of inclusiveness, they will respect and embrace him. Hence, the need for ATM to embark on grassroots sensitization targeted to educate the people about the qualities of His Excellency, Rt Hon. Aminu Waziri Tambuwal CFR.
I am so excited that the ATM has successfully galvanized the formation of the movement across the 774 LGA in the 36 States and the FCT, which will ease the work and make the sensitation for political participation an easy one  in the nook and cranny of Nigeria.
ATM organogram is well structured with men and women of integrity and they are season politicians of high reputation.
In another development, all our chapters are formidable and are well positioned to capture the hearts of Nigerians in favor of Tambuwal in 2023 election and beyond.
The coming weeks and months will be so intriguing as we will be having series of activities to arouse the consciousness of Tambuwal at 2023 with the vision and mission of our sensitization programs.
Therefore, We are soliciting the support of all Nigerians who understand the intrinsic value of democracy and most especially friends and the associates of His Excellency Alh. Aminu Waziri Tambuwal across the country to support ATM, according to the DG.
” The country will soon experience people-oriented administration and inclusive governance devolved of nepotism and rise above ethnicity and religious sentiments which seems to be characterising the Buhari’s Administration which we perceive could lead to another civil war. Hence, We are calling on Tambuwal to step forward and rescue Nigeria from the dungeon of imminent destruction.
Says the DG of ATM,
AMB ENOBONG INYANG aka Don-P original.

One thought on “THEY’RE VICTORIES WE MUST WIN FOR TAMBUWAL, AHEAD OF 2023, SAYS, DG OF ATM AMB. ENOBONG INYANG.”

Fri Feb 5 , 2021
Share This   By: Emmanuel Ulayi. 4th February every year is marked as the world Cancer Day and the theme for 2021, is:  “ I can and I will”. The Commissioner For Health Dr Betta Edu unveiled the state policy direction for Cancer control when the Calabar Cancer Registry council […]