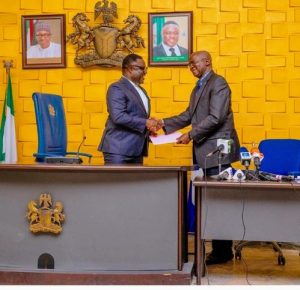 Cross River State Governor, Sir Ben Ayade, has made a passionate appeal to President Muhammadu Buhari to do a sober reflection on the challenging situation confronting his State with a view to offering succor.

Ayade made the plea Monday, during a courtesy call on him by the Minister of Works and Housing, Mr. Babatunde Raji Fashola (SAN) at the State Executive Chambers, Governor’s Office, Calabar.

While soliciting the intervention of the Minister who was in the State to undertake an assessment of roads in respect of which States Governments have made claims for refunds for interventions over the years, Governor Ayade said Cross River has continued to bear the brunt of depreciation of all federal roads in the state, on account of high incidence of massive trucks going on our roads,
as it remains the major source of raw materials for building projects in the entire South-South.

“I want to specially commend the members of your entourage and the team on your visit to the state to assess the level of our intervention. Our situation presents a very unique and peculiar circumstance. A state whose land mass is equivalent to all the other states of the Niger Delta put together. A state that is very massive in terms of commercial rainfall and therefore puts at serious pressure on our roads,” Ayade intimated.

Lamenting the unbearable pressure exerted on the federal roads in the State, the Governor said: “The state as you rightly noted, is the major source of building materials for the entire South-South. This, therefore, has a high incidence of massive trucks going on our roads. However you look at it, we are very much at the forefront of the development of the South-South.

“While other States are small and compact in size, Cross River State stretches in a very linear manner, stretching over 7 hours of driveway from Calabar to Obanliku. yet you are in the same State. The only State with two airports far apart from each other, you fly from Calabar Airport to Bebi Airport in Obanliku and you are still in the same State. And so, commuting on land transport becomes a very big challenge. Linking two communities is not a big challenge when a State is small, but when a State is very long, linking two communities is an ordeal. And so, we have a circumstance and situation where a population of about 4.2 million people, distributed along 23,000 square kilometers of land, sharing both local and international boundaries, including maritime and land boundaries becomes challenging.”

Ayade who further bemoaned the peculiarity of Cross River, also called for a special status to be accorded the state: “Transportation, particularly is a very big challenge and I think in the nature and manner of federal character that we speak, this special status and special challenge requires special attention as a government. Unfortunately, in the kind of federal structure that we run consideration beyond this comes into play.”

“Knowing your background as a Senior Advocate of Nigeria (SAN), an astute, decent, wonderful, performing Governor of Lagos State, whose signature performance has remained a standard for other Governors to follow, your tenure has given us an impetus and a window to see through the workings of your inner body and I believe that you will bring that energy and passion that you made you the darling of Lagos State while as governor to Cross River. We are characterized by very challenging terrain. The enormous rainfall pattern puts a very big challenge on our roads. We are in such a situation that I would not want to speak on camera, but indeed our finances have gone to the lowest level, occasioned by the  loss of our oil wells, occasioned by the ceding of Bakassi,” the governor entreated Fashola.

Continuing, Ayade wailed: “Indeed the NDDC took us away from the 13 percent derivation and under NDDC, the quantum of work done or budget allocated to your state is a factor of the amount of oil produced and now that we have been manually taken away from oil producing states, we therefore also suffer the incidental damage associated with the loss of the oil wells. So NDDC funding to Cross River State is the lowest among the NDDC states. Thirteen percent derivation is gone, oil wells gone, Bakassi gone, all our own militants who also surrendered under the instruction of the federal government to be taken into amnesty has been an impossible thing. While every other state is under the amnesty program, Cross River State is not. I say this in melancholy just to give you a background of the circumstance of our state.”

In a passionate plea to the Works and Housing Minister, Governor beseeched: “I believe that as you go before the Federal Executive Council, in presenting your budget, let them look beyond your report and see what special incentives and intervention that can be given you to support Cross River State. As you go through, you will see that we are doing a dualization of Calabar/Odukpani road, which indeed, by all circumstances is a federal road, but I understand because the metropolitan city has grown to join up, it is almost being classified now as a state road, but that is an intervention for Federal Government because, as the rains are coming, to get into Calabar, you would, of course, have slept in Odukpani Junction for three to four days. 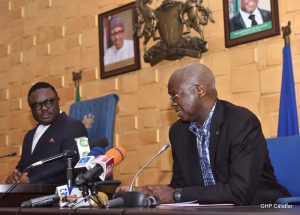 According to Ayade, “we really needed to dualise the road, that was why we approached you and you graciously approved, allowing us to do the dualization of the road. I Am using this opportunity to plead with you, giving the background of the circumstance of our income and our economy, and you have been there, you were there yourself to see the work we are doing. My heart bleeds to hear that we can’t get a refund of that. My heart also bleeds that the road which stretches from the whole of the eastern states up to Delta, coming through Obudu cattle ranch, which is an old federal road has been there since the early 90s, yet no attention by the Federal Government ever since.

That road is near completion, about 145km and Cross River State Government is doing the dualization. “I don’t know if your team was there,  but if you look at the amount of work we have done from the Obanliku/Obudu axis, we are now approaching Bekwarra. By next month, we will start from Okuku/Ogoja and getting to Okpoma to end that project. All of that are interventions on behalf of the federal because the reality is that even though it is a federal road, we have no option but to provide service for our people, and that is the road that brings all the food stuff out of Okuku market which is the biggest market in the South South  of Nigeria, to take to the North and also take food stuff from North to Southern Nigeria. If that road was not fixed, am sure we will have a complete new catastrophe before us.”

Earlier, Fashola had disclosed that his visit to Cross River State, his second within two weeks  which was at the instance of Mr President was for the Presidential Committee which the Ministry of works chairs, with some other ministries, including the office of the Secretary to the Government to undertake an assessment of roads in respect of which States Governments have claimed the refunds for interventions done over the years.

“Our mandate from Mr. President remains the same. We are not in competition with any state and our duty is to provide all the support that we can to every state government to achieve developmental objectives. Our visit here has taken us to the inspection of a couple of roads. We broke ourselves into two; a team went to inspect the intervention, in respect to what you seek claims at Obudu yesterday (Monday).
According to Fashola, “our mandate is  also to assess the level of intervention that we have undertaken on those roads to verify that they were actually done and we have gone and we have seen, we will submit our report and we will present it before the Federal Executive Council to take a decision with respect to the claims by your state.
“Just for public consumption it might be important to reiterate that States like Bayelsa, Ondo, Osun and Rivers are also involved in this later phase of the exercise and I say later phase because in the first stance when this committee was initially constituted, many states filled claims including Cross River, there were documentation issues which delayed the attention to Cross River State.
“We had to reconstitute because by the time the documents from Cross River State arrived, our mandate had expired, so we had to be reconstituted to state this phase.
If and hopefully when, any of the states receives their claim, they should be ready to also own up that they have contributed to the public debt and investment in infrastructure. 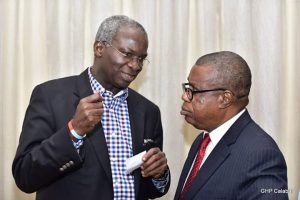 “Perhaps it bears repeating that Cross River serves as a major source of building materials for the south-south and most parts of the country; for quarry, granites, rods, stones and also cement. And that means that the tonnage exerted on federal roads that carry these drops is quite much.”

CRS MINISTRY OF HEALTH SHUT DOWN, SOLUTION F CLINIC AND MATERNITY IN BOKI  FOR QUACKERY. 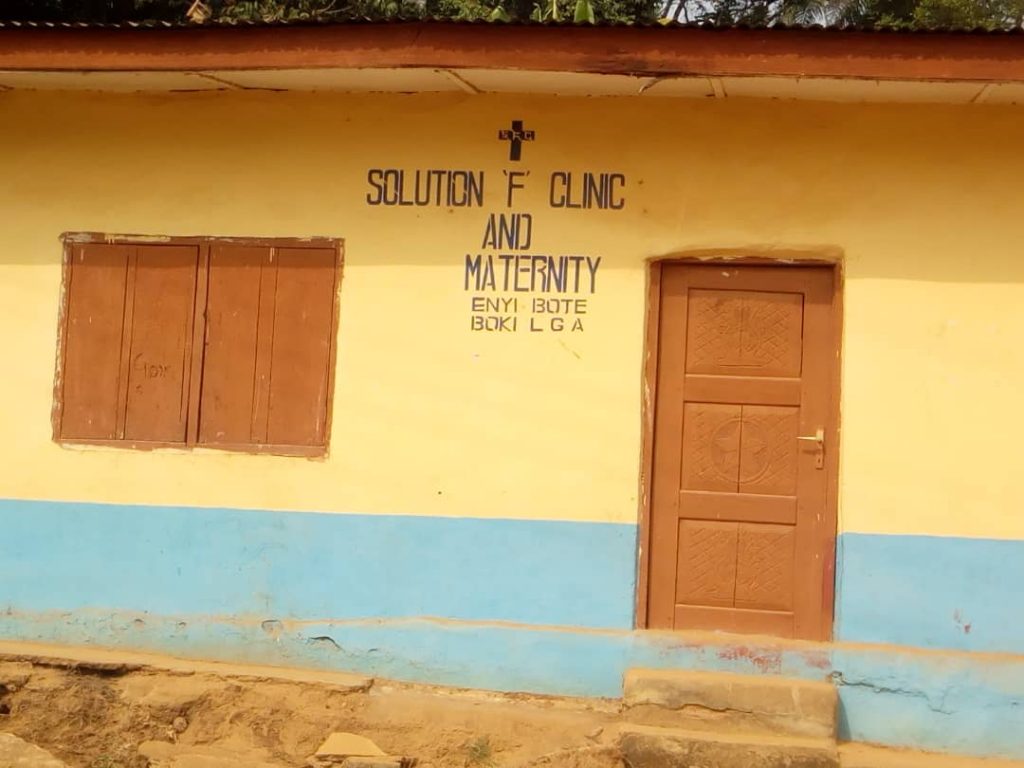