The authority of Nigerian Correctional Service have refuted reports in one of the private television stations and some social media handles claiming sponsorship of a football competition by detained journalist, Agba Jalingo for inmates in the Afokang custody Centre of the service in Calabar, Cross River State.

The Nation Newspaper reports that the Controller of the Correctional Service, Cross River State command, Imaikop Ndaekong frowned at the reports, saying they were erroneous and misleading.

He told reporters: “Sequel to the news aired on Monday 11th November by Channels Television – News Bar and on social media, reporting the hosting of inter-cell competition in honour of an awaiting trial inmate, Agba Jalingo in Medium Security Custodial Center, Calabar, the Nigerian Correctional Service, Cross River State Command received with dismay the news report by the media that the competition is designed and organized in honour of the awaiting trial person, Agba Jalingo in Calabar Custodial Center.

“The report is not true but misleading as the said event is an annual programme aimed at giving inmates of the center a sense of belonging and joy during the festive period.

“The inmate in question has since denied knowledge of such unwarranted news story. The command wishes to advise the public to disregard the said report as the competition is not organised in honour of Agba Jalingo or any other inmates in our correctional facility. Furthermore, the event has never been opened for sponsorship”.

Emphasising that the competition had been ongoing in the custodial facility in in Afokang, Cross River State, the State Controller of the service maintained that it is an annual competition for inmates during festive season and it is as old as the year the facility began operation in the State.

The officer in charge of the Afokang Calabar custodial facility where Jalingo has been remanded for the past two months and counting, Deputy Controller Adewole Emuchay, said Jalingo has been well behaved and friendly.

“He has personally denied acknowledge the report”.

Mr. Agba Jalingo is a journalist and rights activist facing trial for demanding accountability from the Cross River State Government over the NGN500 million approved and released for the floating of the Cross River Microfinance bank.

He is facing four count charge bordering on conspiracy, terrorism, treasonable felony, and attempt to topple the Cross River State Government. He pleaded not guilty to the amended charges read to him on October 30, 2019.

His trial continues this morning (Wednesday) 9am with testimony from masked witnesses as ruled by Justice Simon Amobeda we Federal High Court Calabar.

Start Investing, Do Not Depend On One Source Of Income, Russia Based Agency To Cross Riverains

Tue Feb 4 , 2020
Share ThisBy Admin A Russia based international organization brought into Nigeria by Kalinka, in partnership with Don Napo has advised young Cross Riverains to start investing in business than completely depend on one source of income to increase their economic security and well being. Stating this in a workshop, the […] 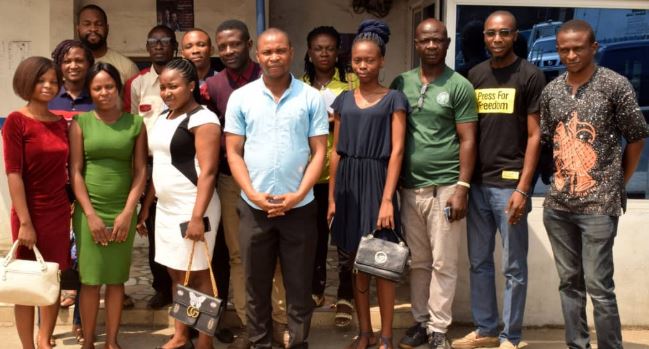